We are delighted to congratulate Ashlee Christoffersen, University of Edinburgh, on winning the 2021 Joni Lovenduski PhD Prize in Gender and Politics for her thesis The politics of intersectional practice: Representation, coalition and solidarity. Our jury particularly appreciated the intellectual innovation of the thesis, its rigour, and its depth of commitment to exploring intersectionality in practice.

In light of this year's award having been presented to Ashlee virtually, we have created this short video which was premiered at the European Conference on Politics and Gender (ECPG) virtual pre-conference event on Wednesday 7 July.

About the winning thesis

The politics of intersectional practice: Representation, coalition and solidarity focuses on the under-researched area of equality NGOs and their interaction with the field of policymaking. The research is based on fieldwork conducted with networks of third sectors equality organisation in England and Scotland, using interviews, focus groups, observation and document analysis. 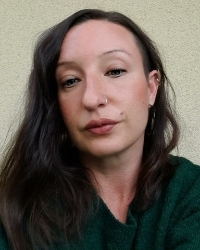 Ashlee Christoffersen is a Research Fellow at the University of Edinburgh. Her research is concerned with the historic and contemporary operationalisation of the black feminist theory of intersectionality in equality policy and practice: its influence and possibilities, as well as the discursive and material resistance it faces. She also has a particular interest in intersectional research methodology.

Ashlee's most recent work appears in Policy & Politics and Ethnic and Racial Studies. She speaks more about her research as part of the Intersectionality, unfiltered video series. Ashlee will soon be launching a report for practitioners and policy makers, an animation and videos related to her PhD research.

Prior to undertaking her PhD, Ashlee completed a BA in Political Science and Women’s Studies, as a ‘first gen’, at Simon Fraser University, Canada, and an MA in Gender Studies at SOAS, University of London. She previously held research and practitioner roles at the Equality Challenge Unit (now Advance HE), centred (a London-based LGBTQ community development organisation), the Trades Union Congress, and the Institute for Intersectionality Research and Policy, and Health Research and Methods Training Facility, at Simon Fraser University.

In her own words

‘I am incredibly humbled to have won this prize. It all started with searching for a suitable supervisor for this project, and finding Akwugo Emejulu – I am deeply indebted to Akwugo and to my other supervisors Richard Freeman and Nasar Meer, my research participants, examiners Gail Lewis and Sharon Cowan, and mentor Fiona Mackay who supported my nomination.

Particularly as a white woman receiving this prize for this particular thesis, I also want to acknowledge that there are many black and of colour potential, current and completed PhD students who have been denied the same opportunities I have had, and/or had negative experiences in the discipline of Political Science in the UK and Europe.'

‘This work fills an important gap in gender and politics scholarship: the operationalization of intersectionality for empirical studies. Ashlee shows a firm commitment to drawing extensively on the intellectual contributions of Women of Colour, providing a deep engagement with intersectionality in terms of research, epistemology, ontology, practice, and activism. This is a thorough and multifaceted approach that engages with the dilution of intersectionality but does not replicate it.

This thesis provides rigorously developed tools to tackle an urgent problem in European feminist political science. Scholars building on her work will find a well-developed intellectual platform that helps avoid the ‘watering down’ of intersectionality and instead moves it much closer to the kind of egalitarian and authentic intellectual position that most feminists aspire to.’ Read the full laudation.

Our jury would also like to extend an honourable mention to Malin Holm’s The Rise of Online Counterpublics? The limits of inclusion in a digital age for its theoretical innovation to the study of the public sphere and the notions of counterpublics and inclusion.