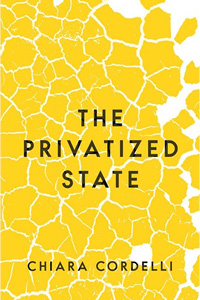 We are thrilled to announce that the inaugural Political Theory Prize has been awarded to Chiara Cordelli for The Privatized State, published by Princeton University Press in 2020.

In light of this year's award having been presented virtually, we have created this short video to capture this special moment.

Many governmental functions today—from the management of prisons and welfare offices to warfare and financial regulation—are outsourced to private entities. Education and health care are funded in part through private philanthropy rather than taxation. Can a privatized government rule legitimately? The Privatized State argues that it cannot.

The book shows how privatization undermines the very reason political institutions exist in the first place, and advocates for a new way of administering public affairs that is more democratic and just.

Chiara Cordelli is an Associate Professor in the Department of Political Science at the University of Chicago. She works in social and political philosophy, with a particular interest in theories of justice, political legitimacy, normative defences of the state, the public/private distinction in liberal theory, and the ethics of philanthropy and assistance.

Beyond several articles, she is the author of The Privatized State (Princeton University Press, 2020) and the co-editor (with Rob Reich and Lucy Bernholz) of Philanthropy in Democratic Societies (University of Chicago Press, 2016). She also contributes to non-academic outlets including, most recently, the Guardian, Boston Review, and HistPhil.

In her own words

'I’m thrilled to learn that The Privatized State won the 2021 ECPR Political Theory First Book Prize. What an honor! Sincere thanks to the members of the prize jury.'

'Jury members were particularly impressed by the clarity and analytical subtlety by which [Cordelli] unfolds a theory of legitimacy in the privatized state. The book combines practical philosophy with elements of histography and policy analysis to produce a highly original contribution to modern political theory. […]

In this context [Cordelli] persuasively develops principles of provisional and transitional justice for contexts where governance is already extensively privatized. She also proposes ways of rebuilding public instruments of government and administration, which are no longer based on a system of command and control but on an ethos of public service, citizens’ trust and more direct democratic involvement in administrative processes.'

Our Jury wished also to extend an honourable mention to Injustice and the Reproduction of History: Structural Inequalities, Gender and Redress by Alasia Nuti, published in 2019 by Cambridge University Press.

The Jury members were impressed by its important contributions to the field of Political Theory, and the development of a new and insightful account of injustice across time.