We are thrilled to announce that the 2021 Stein Rokkan Prize for Comparative Social Science Research has been awarded to Ran Hirschl, Professor of Political Science and Law at the University of Toronto, for his book City, State: Constitutionalism and the Megacity, published by Oxford University Press in 2020.

The Stein Rokkan Prize is awarded annually by the International Science Council (ISC), the University of Bergen and the ECPR to a substantial and original contribution in comparative social science research.

In light of this year's award having been presented virtually, we have created this short video to capture this special moment.

As the world is urbanizing at an extraordinary rate, City, State argues, new thinking about constitutionalism and urbanization is desperately needed. 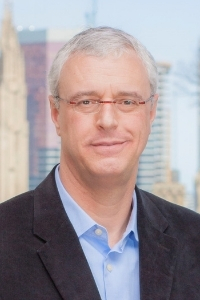 Ran has won academic excellence awards in five different countries, delivered keynote addresses in conferences worldwide, and is the recipient of globally competitive research grants. He is an elected Fellow of the Royal Society of Canada (FRSC) – the highest academic accolade in that country.

In his own words

'This is a great honour. Like many others, I studied Rokkan's groundbreaking work in my comparative politics courses back in the day. Writing a book of this scope on a vitally important yet understudied topic at the intersection of public law and comparative politics requires tremendous devotion and research. It is very gratifying to receive this prestigious award, with its European and international outreach.'

'Readers will not think about cities and constitutions the same way after reading this book. The author points out the glaring absence of a place for cities on constitutional law thinking, despite their concentration of the world’s population at this point.

The book brings together perspectives from political science, law, and sociology to show the economic and political importance of the city, but then shows equally how cities are systematically diminished when they do not have constitutional authority to protect themselves from politicians in the state and to demand things from corporations who use structural power against them....

The book is original, innovative and deeply comparative. It is an example of how a juridical perspective can grasp relevant political and policy dynamics.'

The Jury members were unanimous in their choice of the winner but wished also to give honourable mention to Inside the mind of a voter by Michael Bruter and Sarah Harrison, published by Princeton University Press in 2020.

The Jury appreciated not only the unique and innovative set of research approaches but also for asking the big question of what the process of voting means to citizens in times where political disputes over policy issues often grow bitter.